AGAIN BEING QUOTED, WITH RESONANCE NOTED.

Today we celebrate Steve’s 58th birthday. I’m here, and Steve is still here too in his own way.

The conventional celebrations are somewhat hampered on account of Steve not being here in the flesh and blood form of carbon. He is physically now a more static form of carbon (ashes) but certainly here in spirit as far as I am concerned. Not an alcoholic spirit I hasten to add, but a very kind and awesome spirit. In the same manner as he was a very kind and awesome living and breathing human being.

As ever, I wanted to come in and celebrate Steve by marking the occasion with a birthday blog. Previous birthday blogs can be read here:

My last birthday blog (see above link for May 2018 – SUPERSONIC FLIGHTS & HUMAN RIGHTS) talks about an amazing find where I chanced upon seeing a BBC on-line article which featured me and Steve. They quoted from a piece I had submitted to a Concorde Membership website. I had not been aware they were using my story so it was sheer luck that I saw it that day.

A few months ago I was doing an internet search on something else and, once again, I happened upon a link to a website which threw up something wonderful. It was a link to pages in a new book about Concorde.

Much like the BBC article, to my utter surprise I found myself reading mine and Steve’s names on the screen in front of me. Regular readers of my blog will, by now, know I like to think it was not just a case of being luck or a fluke. Instead, it being more a case of Steve communicating/intervening.

The book in question is called ‘LAST DAYS OF THE CONCORDE The Crash of Flight 4590 and the End of Supersonic Passenger Travel’. Its author – Samme Chittum – works at Smithsonian Books. In her book, Samme has cited the BBC article and pulled out my particular entry for her chapter – ‘Final Farewells’. See the slideshow below for the entry, alongside mine and Steve’s names being given in the Index and source material.

I felt honoured but also, If am am honest, there was a little bit of me that got a bit annoyed. Once again I had to come across my own words by accident. For courtesy sake, if nothing else, the BBC and Samme should have made efforts to ask permission first. That said, once something is out there on the World-Wide-Web it takes on a life of its own.

To be fair, I am happy for people to use my words and our story as long as they use them in such a way as to raise awareness of Huntington’s disease (HD). Both the BBC and Samme left in the Huntington’s reference. I am very pleased they picked up upon the poignancy and retained integrity to that end.

Flight 4590 was the flight which crashed on its take off from Paris in July 2000. It was not the last flight ever made by Concorde but in a market where luxury travel was already struggling to be profitable, questions over its safety now led to its rapid demise. A very deep and personal tragedy for those on board and their loved ones; a tragedy for the industry; and also a tragedy for the people of Paris. Devastated no doubt that such an accident happened, and that such an iconic symbol of aviation was effectively lost on their watch.

Like many people, Steve and I saw the 2000 news footage on television that day. First of all our hearts broke for the people who lost their lives. It was obvious no one could have survived and lives could also have been lost in the hotel she crashed into. Sadly it was confirmed that the crash resulted in the loss of 113 lives. As this news article writes, some who died were, like us when we flew, flying to celebrate a special event having saved for many years.

There was a secondary emotion on that day too. Our hearts sunk for the loss of such plane knowing it could surely mark the end of Concorde’s reputation. She was beautiful and elegant. She was special. We could never have imagined that our own names and story would be linked to that very event in a book some eighteen years later.

Thousands of people have travelled on Concorde. There have no doubt been many people writing about experiences of flying on her or even just seeing her fly by. It is emotionally humbling to think we have been selected to represent a couple’s own human story in the history of Concorde.

Forward fast to April 15th 2019 and that sinking feeling was experienced again when watching one of the most symbolic icons of Paris go up in flames. The Notre-Dame Cathedral.

Notre-Dame will be rebuilt with time. Whether it will be reincarnated as a modern phoenix or sympathetically restored to reflect its past more than its future, the Notre-Dame, as it stood on the banks of the River Seine in 1988, will always have a place deep in my heart. Beautiful; strong; and comforting even to those like me who are not religiously inclined.

I posted in my blog WARNING SIGNS & TUBE-TRAIN LINES how we officially got engaged in Paris during a romantic trip booked especially for the occasion. I have very few photos left of that trip, and sadly none with Steve in. However, I do have a photo taken in fun. I am leaning on a rather glorious lamppost in the gardens of Hotel de Ville. In the background you can just about make out the famous spire that came unceremoniously crashing down in the blaze. Paris will always have a place in mine and Steve’s heart alongside Concorde. 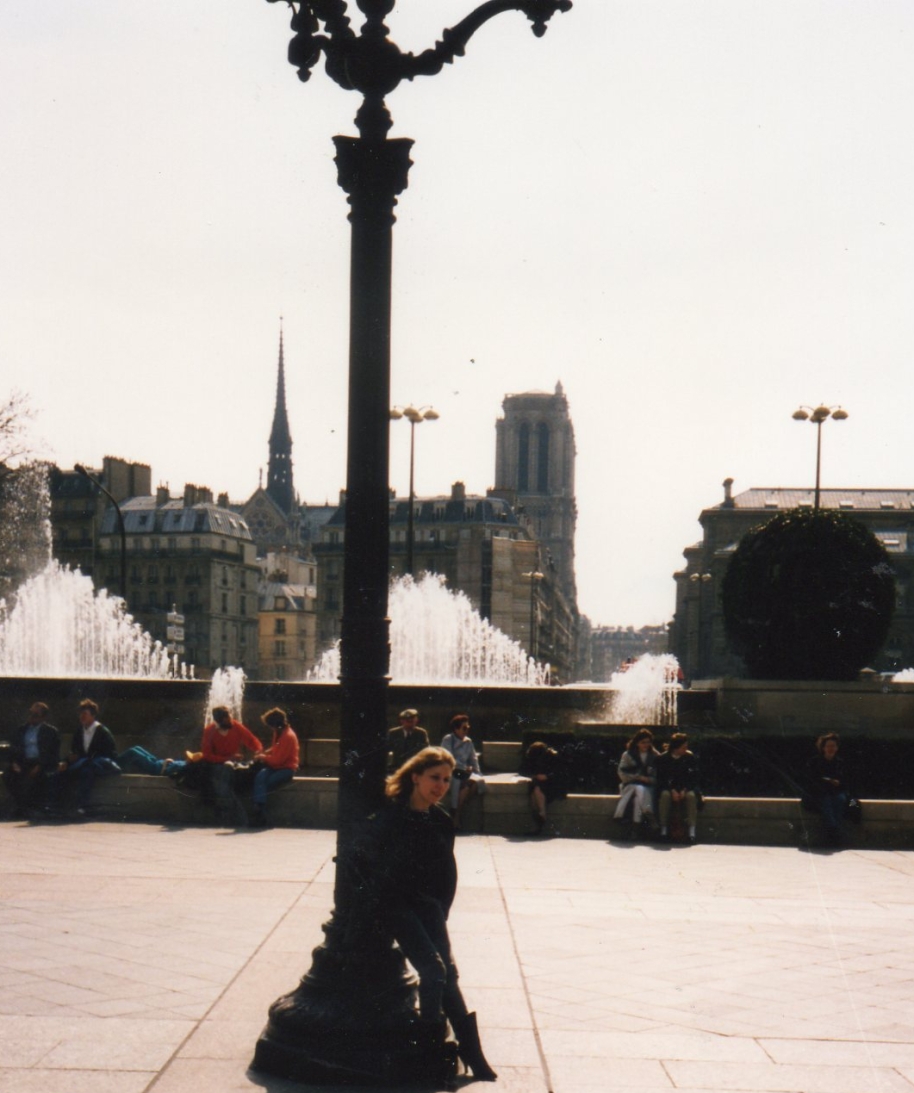 We visited Paris only once again after the engagement trip. There were so many other places to visit. As time went by though, and Steve was getting less able to travel, we would sometimes take the Eurostar to places like Brussels and Lille. It was relatively easy to get from home to Waterloo Station where the train originally left from.

By staying in hotels very near the destination stations we could stay for just a couple of nights with minimum fuss and luggage and still feel ‘normal’. Paris was also easy by train but the relaxed pace of Lille, in particular, suited us.

Our last such trip was in July 2005. We had booked for a couple of nights to stay in Hotel Ibis in Lille Town Centre. The relatively easy travelling was somewhat marred where our departure journey was July 8th 2005.

As you can imagine, being within 24 hours of the London bombings there were many issues of security on a practical level, and fear on a psychological level, to deal with. We opted to put our fears aside and do the British thing of not letting the terrorists defeat us.

I am so very, VERY glad we still took the trip. We had a lovely time and I still have a few photos, some of which are below. One is Steve standing in the Town Centre which was taken by me. Another is one Steve took of me. I took the last photo nearby where we were staying. Probably on our way back to the hotel after a lovely day but Steve is now beginning look tired bless him.

Unlike the earlier photo, Steve is leaning to one side with his gait recognisable. He is obviously telling me something. Most likely telling me to hurry up so that we can get back to the hotel for a cuppa.

He had a point. whereas Steve was more a natural photographer, it had probably taken me ages to get the name of the shop and street in the frame.  All in all though we were not letting Huntington’s beat us. Still enjoying life to the full. As you can imagine,  I miss travelling with Steve terribly!

Today we will be watching Queen DVDs and eating Belgian Chocolates. I no longer travel as it is not the same without Steve. I managed to find Canary Wharf have a branch of Godiva so have bought a large ballotin replicating the kind on indulgences we would have treated ourselves to when travelling to France and Belgium. I will help Steve with his share of course 😉

I will close the post with a new poem for Steve, but first an up-date on Harry Dainton (my post GIRL WITH A PEARL HEARING refers). There has been one development (excuse the pun). I had a tip off that a few days ago a Public Notice went up where the Plans have been re-submitted. I hope to add my two-penneth worth to try getting some consideration given to the fate of Harry and the others but we shall see.

As for ABC vs St Georges’ (initially highlighted in my post WARNING SIGNS & TUBE-TRAIN LINES), as far as I know the Case is still expected to go to trial in 2019. However, there has been no news of progress, be it a trial date or an out of court settlement.

It is a tad frustrating that in my job I do occasionally work at the hospital at the centre of the Case. I even deal with the Consultant at the centre of it (the one who accidentally gave the Huntington’s diagnosis away). However, it would be unprofessional to make direct enquiries with the parties themselves so I have to keep schtum. Somehow I don’t think the Trust or Consultant are likely to be subscribers to this blog. Then again, who knows where my writings will end up being reproduced next eh?

Another occasion when took by surprise,

As our names appear sharply in front of my eyes.

Sure enough Sweetheart, as I read on,

Our names again linked with such an icon.

Clearly our story has resonance where,

Others who read it feel they want to share.

It’s not only here that our story is read.

As I focus on good times that I spent with you.

From the fountains in Paris, near Hotel de Ville;

To a peaceful Town Square in the Centre of Lille.

I do see the tiredness that HD could bring;

I see more than that though, you were not giving in!

It may not be Belgium were we spend today,

But we’ll still celebrate in our own special way.